Although I have written quite a lot for The Exeter Daily, I also continued with writing for sideonetrackone and should have some blog posts on the way from the work I have done with the zine in the near future. In the meantime, here is an interview I did with The Skints when I saw them in Exeter at the end of May. I also decided to give the camera a bit of  a dust off and attempt to take some photos of the gig whilst I was there!

Have you ever wondered what ‘East London Reggae’ sounds like? Well according to The Skints, this is the sound they create; consisting of a mix of ska, reggae, dub, punk and hip-hop.

Often taking commercial hits such as Katy B’s ‘On A Mission’ and The Smiths ‘Charming Man’ and putting their own unique twist on it, they are certainly ones to look out for on the summer festival music circuit.

Steph Cross managed to catch up with one of the members of the band and grab a few words at the end of their recent UK tour.

For those readers who are not familiar with ‘The Skints’, could you briefly tell us a little bit about yourselves and how you got to the stage that you are now?

We’re 4 friends from London who are all good homies from school. We started playing around London in 2007 honing our crafts and booking our own shows, then we started touring in late 2008, and we haven’t stopped touring since and put out 2 albums somewhere in there!

On your most recent tour and gigs that you have done, you have had the opportunity to play at a variety of venues including Koko in Camden. Are there any particular venues which have stood out for you? Also are there any venues you haven’t played at that you would like to play?

We’ve played so many cool venues all over Europe it’s hard to pin point…To headline Koko was especially special for us though. We love that room. For us the size of a venue doesn’t make it good or bad, some of the best shows we’ve played have been at sweaty little 200 cap toilet venues.

When writing songs is there any particular process that you go through? Similarly, where do you get your inspiration from

All our songs come different as we have 3 different singers/songwriters. It’s a bit of a mental way to do things, but somehow we get there in the end. Our inspiration and content is pretty much us; what we feel, what we see, things that happen to us and what we do, that’s all we an honestly talk about really! 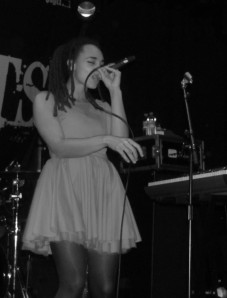 It seems that the band have a love-hate relationship with East London; with last year’s events such as the Hackney Weekend and the Olympics in Stratford, do you feel East London is developing into a more thriving place than it used to be?

I mean when I was growing up it literally felt like there was nothing to do but skate and listen to records, which I guess is more positive than robbing phones or selling drugs, but I’m not sure how much the whole Olympic situation has really benefitted East Londoners more than a big fuck off Westfield Shopping Centre. The fact that Newham council were relocating residents and families up to places like Stoke and Hull so that they could use properties for crazy rent says a lot.

On your first album, the lyrics in the song ‘GET ME!’ state that: “I can count on both hands the bands that I think are worth a damn.” Do you feel the same now? What few bands?

Err yeah haha! I find it really hard to get excited about new bands, and I don’t think there’s been a ‘classic’ British album in 5 years, which as a music fan still pains me! Unfortunately some of the bands I was thinking about when I wrote Get Me have split up, so I won’t name names, because I probably do like more than 10.

Do you think an online presence is important for fans to find you and for critics to find your music to write about?

Whether you like it or not, in 2013 an online presence is vital if you want people to hear your music and come to your shows, period. We wouldn’t have got half as far as we have without promoting ourselves online. It’s just a staple part of how music works now.

What is your opinion on music sharing? Do you give music away for free? Why?

We give the odd track away for free but we don’t give our albums away for free as we believe what we’re doing does have SOME value! Alot of time, money and effort goes into our recordings so we feel it’s call to charge a small price for our music. However, I’m not gonna cry about people downloading it for free, as a musician you’re never gonna win that war and I’ve no doubt that alot of people that come to the shows listen to our stuff online for free, so if that gets them to the show then fair doos! But seriously, buy our records.

I’m still a vinyl and CD buyer, but I do buy the odd track on iTunes if I want something immediately. I love my record collection though.

You took an unusual approach to getting your 2nd album together by getting fans to contribute through Pledge Music. Was there any particular reason for this? Did you expect the response that you got and would you do it again for future albums?

Yeah we did it cos we had no money and didn’t wanna sell any creative control to a label for an advance haha! We couldn’t believe how well it worked in our favour though, thanks to everyone who Pledged! I’d like to think we won’t HAVE to ask such a big favour from our fans again but never say never.

You have done some amazing covers of songs such as Katy B’s On A Mission, but are there any artists you would be afraid to cover?

Ummm, I think we’d be more afraid of covering certain songs rather than artists. I think so long as you’re treating other artist’s music with respect it’s cool.

On the flipside, are there any covers that you hope or would like to do in the future?

We’re always jamming new covers in sound check and practise and just acoustically backstage, so maybe there’ll be some more out there to hear soon.

I read a description of your band somewhere that stated that you are ‘a punk rock band who plays reggae.’ Do you agree with that statement?

Ummm, I mean we’ll always be the punk kids we were. Whether we play punk music or not is a different story, but The Skints as a band will always carry that raw energy in it’s heart to a reggae beat, take from that what you will.

After the tour, what is next for the band?

A busy festival summer across UK and Europe and cracking on with some new tunes! 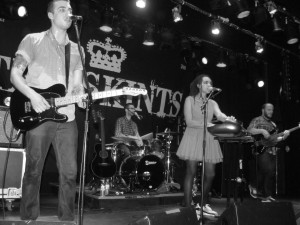 This interview can also be read at: http://www.sideonetrackone.co.uk/2013/06/30/interview-the-skints/